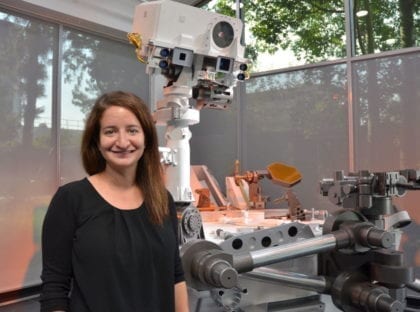 With a broad interested in the origin and evolution of terrestrial bodies in our solar system, Dr. Fraeman has concentrated on investigating how the complex geologic histories of Mars and its moons are preserved in their rock record.  She specialized in remote sensing with a focus on visible and short wavelength infrared reflectance spectroscopy.

Dr. Fraeman received a B.S. in Physics and Geology & Geophysics from Yale University and a Ph.D. in Earth & Planetary Science from Washington University (St. Louis). She was also the recipient of the P.E.O. Scholar Award (2013), the Keck Institute for Space Studies Prize Post-doctoral Fellowship (2014) and the NASA Group Achievement Award (MSL Extended Mission-1 Science & Operations Team – 2017).

This year’s global Mars Society conference will be free of charge (although donations are welcome). For full registration details, please click here. Regular updates, including a list of confirmed speakers, will be posted in the coming weeks on the Mars Society web site and its social media platforms.