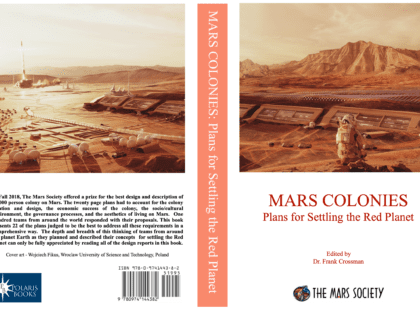 In October 2018, the Mars Society announced that it was holding a special international contest called “The Mars Colony Prize” for designing the best plan for a Mars colony of 1,000 people. There would be a prize of $10,000 for first place, $5,000 for second and $2,500 for third. In addition, the top 20 papers would be published in a new book – “Mars Colonies: Plans for Settling the Red Planet.”

This is that book. The 580 page grey-scale softcover edition and the color eBook edition are now for sale at Amazon and on other online sites and can also be ordered through your local book store.

The contest announcement said that the designed Mars colony should be self-supporting to the maximum extent possible – i.e. relying on a minimum mass of imports from Earth. The competition’s rules stated “In order to make all the things that people need on Earth takes a lot more than 1,000 people, so you will need to augment both the amount and diversity of available labor power through the use of robots and artificial intelligence. You will also need to be able to both produce essential bulk materials like food, fabrics, steel, glass and plastics on Mars and fabricate them into useful structures, so 3-D printing and other advanced fabrication technologies will be essential. The goal is to have the colony be able to produce all the food, clothing, shelter, power, common consumer products, vehicles and machines for 1,000 people, with only the minimum number of key components, such as advanced electronics needing to be imported from Earth. As noted, imports will always be necessary, so you will need to think of useful exports – of either material or intellectual products that the colony could produce and transport or transit back to Earth to pay for them.”

The Mars Society contest was open to people from every country, and the response was incredible. One hundred design reports were received from around the world, with some teams including members from multiple countries. A down-select was made to 25 semi-finalists and then to the top 10 plans, whose authors, representing teams from France, Switzerland, Poland, Russia, Sweden and the U.S., were invited to present their plans in person to a panel of judges chosen by the Mars Society at its 22nd Annual International Mars Society Convention held in Los Angeles in October 2019.

This publication contains the plans of all 10 finalists and 12 of the semi-finalists, with an introduction by Mars Society President Dr. Robert Zubrin. Their tremendous depth, breadth and diversity present an unmatched compendium on concepts, designs and plans for the first human settlement on a new world.

Commenting on the book, Dr. Zubrin said, “There has never been a book like this. Now that the entrepreneurial launch revolution is opening the way to space, it is time to start thinking seriously about how we can begin the process of launching new – and hopefully better – branches of human civilization on new worlds. To do that, we certainly need to think about the technical aspects of such a venture, but also the economics, the politics and the aesthetics. We need to not only make Martian civilization possible, we need to make it prosperous, beautiful, fun and above all, free. I think we can do it. This book shows how.”