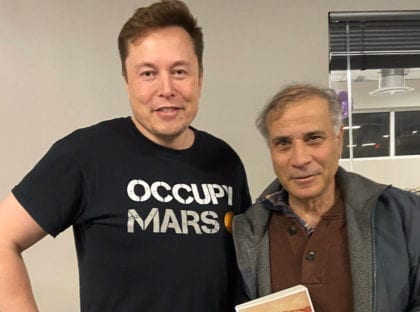 Mars Society President Dr. Robert Zubrin visited Boca Chica, Texas yesterday to meet with SpaceX Founder & CEO Elon Musk. During their meeting, Mr. Musk explained his company’s extraordinary plan to begin the human settlement of the planet Mars, which was very much in evidence as hundreds of people were lined up outside the facility to join his team to build Starships.

Dr. Zubrin asked Mr. Musk what the Mars Society could do to help his Mars effort and was told the organization should “spread the word on the unlimited future opened by making humanity space-faring.” Dr. Zubrin responded, saying “[The Mars Society] will begin next week by announcing a new international contest to design a 1-million person Mars colony.”

A copy of the new Mars Society book, “Mars Colonies: Plans for Settling the Red Planet“, which details over 20 designs for the first permanent human settlement on Mars, was also presented to Mr. Musk.