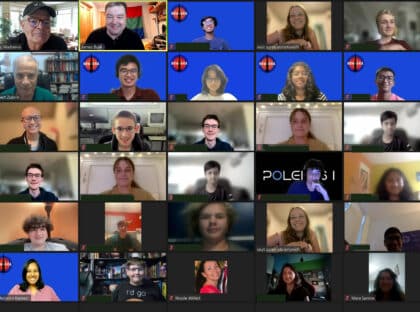 The Mars Society, the world’s largest nonprofit organization dedicated to sending humans to Mars, has recently concluded its first cohort of a groundbreaking educational program “International Mission to Mars”, an engineering design competition for high school students.  The program is modeled on the approach taken in engineering design courses at some of the leading universities in the world. In conducting this program, the Mars Society sought to demonstrate the value of a new and much more creative way to teach science and engineering at the secondary school level than is currently being practiced.

The first cohort represented a diverse and multicultural group of 40 high-school age students from around the world who were organized into five teams based on their time zones. Students hailed from the U.S., Canada, Germany, Poland, the United Arab Emirates, Peru, the Philippines, Singapore and India.

The team scoring highest in the competition was Team 2, who named themselves “N.E.W. E.R.A.”, and consisted of students from across Asia and the Americas.  We also provided individual winners for each of the four scoring categories: Team 5 won for Science, Team 3 won for Engineering, Team 2 won for Human Factors, and Team 1 won for Cost.  All five of the teams created excellent design concepts and are being recognized for their achievements in multiple ways.

The students were provided background lectures via Zoom video conferencing by some of the most prominent Mars experts in the world on a wide variety of topics. These included how to search for life on Mars, how to design spacesuits and other critical mission elements, and the science and technologies behind Mars exploration.

The Mars Society has made nearly all of these educational lectures available to the general public via its YouTube Channel.

The program succeeded in teaching these high school students advanced concepts about science, engineering, technology and mission design. The participants then designed their own Mars surface mission, including its habitat, surface vehicles, scientific instruments, power system and other equipment and supplies, crew size and composition, mission location, scientific objectives, rations, duration, and exploration plan. They had 30 metric tons of useful payload that had already been delivered to the Martian surface, plus an ascent vehicle capable of returning up to six astronauts from Mars to Earth.

The students created mission design elements with four major factors in mind: Science, Engineering, Human Operational Challenges, and Cost.  These factors were the key elements of the scoring rubric, and teams were organized to have students focused specifically on these areas, so that the proper discussion and tradeoffs could be made in their final designs. In addition to handling their own area as well as they can, the students worked out the best possible compromises to produce the best overall result.

The designs of each team were written up in a report, with each team member responsible for authoring a section. In addition, eight coaches/mentors were also assisting and supporting the students with their design work and presentation preparation activities.

An expert panel of judges rated the participants’ designs, presentations and rebuttals based on their technical and scientific merit and how they address the four major factors.

The Mars mission designs will be published by the Mars Society in a book, which will be available for sale on Amazon.com.  Students who participated in the design activities will receive a certificate attesting to their participation, useful for augmenting their college entry applications.

In addition, the winning design team and all other teams have been invited to present their proposal at the 25th Annual International Mars Society Convention this October at Arizona State University.  The Mars Society will also organize a special panel at the event with several of the program participants (including students) to discuss the overall learnings from this program.

The Mars Society is now seeking educational grants and other funding sources in order to continue and even expand this program next year. Inquiries can be directed to Mars Society Executive Director James Burk at [email protected].