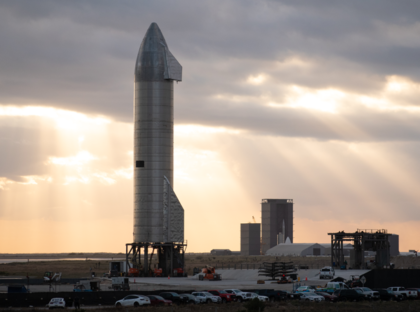 In the late afternoon of May 5, SpaceX’s Elon Musk tweeted, “Starship landing nominal!” Musk is not known for understatement. But seeing that stainless steel behemoth soar was, for many, something more like phenomenal. Over 5 million people watched the spectacle on YouTube, perhaps many with bated breath, as every prior attempt at landing Starship had gone up in flames. Not SN15. This Starship, after having climbed 12 kilometers and then coasted down in a “belly flop” configuration—using its wide silver body as a brake—descended slowly, the force of its Raptor engines offering a soft, safe landing.

Some folks at NASA probably felt a sense of relief. To the astonishment of the space industry, in April, NASA had awarded SpaceX a $2.9 billion contract to modify Starship to serve as the system that’ll take astronauts to the moon. The favorite to win the job wasn’t SpaceX, but the heavyweight “National Team,” consisting of Jeff Bezos’ Blue Origin, veteran aerospace contractors Lockheed Martin, Northrop Grumman, and Draper Labs. The selection was so unexpected that, when word of it was first leaked by the Washington Post, some well-informed observers refused to believe it. Politics suggested the National Team was the safe and sure bet.

Perhaps unsurprisingly, the losing teams (which also included an alliance of small businesses led by Dynetics) promptly protested NASA’s choice, temporarily freezing the program. But, since SpaceX offers the most capability, at less than half the price bid by the others, it will likely prevail. NASA will no doubt take heavy fire from Congress for not playing ball. Politicians believe that NASA exists to serve their need to provide economic benefits to their constituents.1 But the government agency also carries the banner of America’s pioneer spirit. It is a human organization, subject to all the flaws of the system that supports it. But it has its moments. And boy, was this one of them.

It was a milestone moment for Musk, too, of course, who founded SpaceX in 2002, fresh off the sale of his digital payments company PayPal, for no less of a purpose than getting humans to Mars. I know, I know. Entrepreneurs—they’re usually in it for the money, right? But the cynics are wrong about Musk. I was among those who helped convince him to make Mars his calling. If he wanted more money, he knew plenty of easier ways to get it than to start, of all things, a rocket company, a notoriously difficult venture with little chance of success. He was looking to do things of immortal importance. Colonizing Mars (along with electric cars and solar energy) made the cut.

Let me underscore just how transformative, and how profound, Starship could prove to be to our future in space, and to our understanding of life. I’ve been in this business for a decent chunk of time. In the late 1980s, I was on the team at Martin Marietta, now Lockheed Martin, that did the preliminary design for what is now called the Space Launch System, NASA’s flagship vehicle. It was originally devised as a quick and dirty way to create a heavy-lift booster out of the then-operational Space Shuttle system components. Starship is nothing like the Space Launch System. It’s unlike anything NASA has made before. It represents an entirely new concept of space operations, and the impact it very well may have on science is extraordinary.