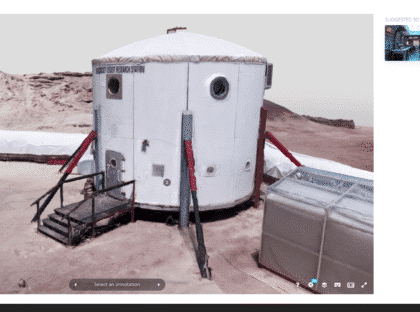 As part of the promotion of our ongoing MarsVR crowdfunding campaign, the Mars Society is releasing new 3-D models of its Mars Desert Research Station (MDRS) in Utah that have been captured by our team as part of the MarsVR project.

We are releasing the first new model, which is an annotated view of the entire MDRS campus exterior.  This is now live on Sketchfab, a 3-D modelling site, and we plan to make it available for download by request so that it can be used in any project with a Creative Commons Attribution license.

Click the above link or use the viewer below to browse our MDRS campus model.

The work on this Sketchfab model began in June 2018 when Azad Balabanian travelled to the MDRS as part of our initial effort to capture the terrain and facilities into VR.  Mr. Balabanian is a world-class expert in VR and photogrammetry (the science of taking a real-life place or object and digitize it into 3D), and has been a partner of our project since the beginning.

For those of you familiar with VR tools, Mr. Balabanian captured the campus using a DJI Mavic Pro drone, and reconstructed the footage using Reality Capture, created a mesh retopology using Adobe Medium, and further optimized the mesh using the Realities.io Processing Pipeline.

The result is a high-resolution 3-D model of our campus which you can move around, zoom in and out and use in various projects.  We have a higher-resolution version of this and other models that we are working with as part of the MarsVR application.

Last year, we also released the model of the interior of our Repair & Assembly Module (RAM) which is also available on Sketchfab.  We will be making this model available for download by request as well.

We plan to release additional interior models of the other areas of the MDRS campus — the Hab, the Science Dome, the Musk Observatory, and the GreenHab, over the next few weeks.  These additional models will also be available for download and use by request in other projects with a Creative Commons Attribution license.

If you enjoy these models and would like to use them for a project, please consider backing our MarsVR Indiegogo crowdfunding campaign to support the work of our project.

Thank you and see you on Mars!

After two weeks of lectures and two weeks of intensive design work, the Mars Society’s International Mission to Mars Design Class & Competition for high school students is now moving towards its final stage, with the five teams of approximately seven students each – one from Asia, one from Europe and Africa and three from the Americas – now writing up their design reports in preparation for the concluding contest beginning next week. The final shootout will occur in three… READ MORE >