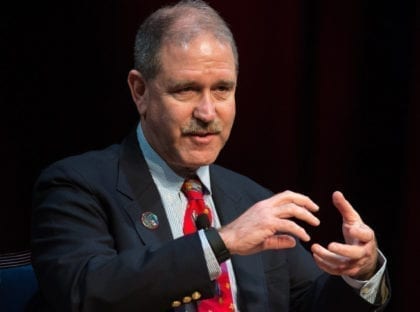 The Mars Society is glad to welcome Dr. John M. Grunsfeld, a former NASA astronaut and Associate Administrator for the Science Mission Directorate, as a virtual plenary speaker during the 23rd Annual International Mars Society Convention, set for October 15-18, 2020.

Serving 17 years as a NASA astronaut, Dr. Grunsfeld is a veteran of five space shuttle flights and visited the Hubble space telescope three times during these missions to near Earth orbit. He logged more than 58 days in space on his shuttle missions and performed eight spacewalks to service and upgrade the observatory.

After retiring from the space agency, Dr. Grunsfeld joined John Hopkins University as a research professor in the Department of Physics and Astronomy. His academic background includes research in high energy astrophysics, cosmic ray physics and the emerging field of exoplanet studies.

He later served as Deputy Director of the Space Telescope Science Institute in Baltimore, managing the science program for the Hubble observatory and planning for the James Webb Space Telescope.

In 2012, Dr. Grunsfeld was named Associate Administrator for the Science Mission Director at NASA headquarters in Washington, D.C., overseeing the agency’s portfolio for Space Science, Earth Science, Joint Agency and the James Webb Space Telescope program. He worked in this position for almost five years.

This year’s global Mars Society teleconvention will be free of charge (although donations are welcome). For full registration details, please click here. Regular updates, including a list of confirmed speakers, will be posted in the coming weeks on the Mars Society web site and its social media platforms.

The Mars Society is pleased to announce that Dr. Sara Seager, a prominent astronomer and planetary scientist at the Massachusetts Institute of Technology, will give a virtual update about efforts to search for bio-signatures in the atmosphere of the planet Venus during the 24th Annual International Mars Society Convention, scheduled for October 14-17, 2021. Serving as the Class of 1941 Professor of Physics & Planet Science and Professor of Aeronautics & Astronautics at MIT, Dr. Seager, along with other researchers at MIT, Cardiff… READ MORE >

The Mars Society is pleased to announce that Dr. Henrik Hargitai, a planetary geologist and mapping expert at NASA’s Ames Research Center, will give a virtual presentation about mapping the Red Planet at the 24th Annual International Mars Society Convention, set for October 14-17, 2021. Dr. Hargitai is involved in a post-doctoral fellow at the NASA’s Ames Research Center and the NASA Astrobiology Institute, focusing on planetary cartography, fluvial geomorphology and the history and localization of planetary nomenclature. Earlier this… READ MORE >

By Evan Plant-Weir, Senior Writer, Red Planet Bound Blog Space exploration is not just about gathering data. By and large, the last few hundred days on Earth are not going to be remembered fondly. Few will recall the COVID-19 years with a sense of happy nostalgia. Ultimately, however, this time won’t be entirely defined by the beating we took at the hands of a pandemic. Despite the many tragedies and challenges therein, we still managed to pull off some pretty… READ MORE >