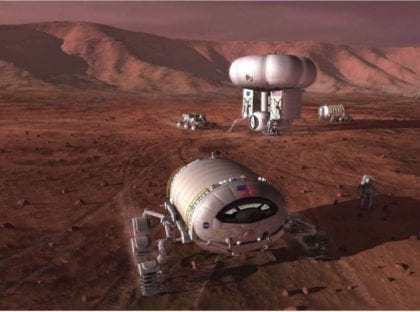 WASHINGTON — Both SpaceX and NASA have ideas about how to get humans to the Red Planet, but the founder of the Mars Society says there’s a better way to do it.

In a colorful talk here at the International Astronautical Congress (IAC) on Oct. 23, Robert Zubrin made the case for his long-standing “Mars Direct” plan. Mars Direct, Zubrin argued, makes more sense than SpaceX’s current Starship architecture and the plans of NASA, which may use the Gateway lunar space station as a staging point for human Mars missions.

Mars Direct, which Zubrin first proposed in the late 1980s and early 1990s, calls for an Earth Return Vehicle (ERV) that launches uncrewed to Mars and arrives at the Red Planet six months later. Aboard this spacecraft will be a nuclear-powered rover that generates rocket fuel from the carbon-dioxide-dominated Martian atmosphere. This rover’s work will ensure that the ERV’s fuel tank is topped up on the Red Planet.

Two more spacecraft would launch from Earth to Mars at the next available window, 26 months after the ERV took flight: a second ERV, and a habitat carrying the astronauts.

The crew then would spend 18 months on Mars before returning to Earth. Half a year later, they would arrive back on their home planet, and the next ERV and habitat combination would already be flying to the Red Planet, Zubrin suggested.

But this plan is not what SpaceX or NASA want to do, Zubrin said in his talk.