International collaboration in space is an important catalyst for the growth of our species. Not only does is bolster our total scientific and economic productivity as a planet, but it also constitutes an important mechanism for our transition into a more planetary-minded people.

Humanity is fumbling through its adolescence. We grapple with the messy contradictions found at the intersection of our violent past, and our aspirations for the future.

We have matured enough as a species to see the urgent need for global coordination, but in the wake of millennia-old conflict we remain divided and distrustful as nations.

This isn’t something that can change overnight. Like the transition of an individual human from chaotic infancy into the wisdom of adulthood, it takes time. What we can do right now, however, is patiently sow the seeds of a more collaborative and unified human community.

There are various avenues through which we can chip away at this hopeful dichotomy. International collaboration in space exploration, and the pursuit of a multiplanetary future are among the most promising.

Whereas it is naïve to imagine that there will be no strategic competition beyond our atmosphere, partnership in space exploration represents one of the most effective ways for sustaining a thread of peaceful international association.

Working together in space offers superior efficiency for the scientific and technological development of our species as a whole. It opens a backchannel for constructive partnerships, even between otherwise opposed nations. Perhaps most importantly, it strengthens the narrative of shared human goals and lays groundwork for the older, wiser humanity we aspire to become.

Getting the Job Done

In the most practical sense, international collaboration in space addresses sheer logistical realities. It can be far more efficient to combine the scientific talent pool and research infrastructure of multiple countries into any given initiative.

The sum of humanity’s capacity for science and technology is distributed across the planet. Concentrations of specialized knowledge are divided asymmetrically between nations. By sharing human resources, individual countries can make use of experience that might otherwise have taken decades to develop.

For physical assets, too, a collaborative approach offers benefit to all parties. Logistically demanding and expensive research facilities can “keep the lights on” by filling the needs of other institutions who themselves can then avoid the initial cost and risk of building them.

By combining resources, a collective of nations can achieve greater efficiency, deeper capability and can avoid duplication of effort. All the while, society is enriched by the resulting discoveries and innovations.

The deeper we delve beyond the atmosphere, the more essential this international economy of scale becomes.

As we seek to establish a permanent, self-sustaining presence on Mars over the next century, the need for human expertise, R&D infrastructure, and manufacturing capacity will be substantial. The demands of this vital goal will exceed the capabilities of any single nation. Becoming multiplanetary will require nothing less than a combined, global effort.

This association by necessity is fundamental to virtually all the great challenges we face as a species. The simple fact that we are in this together is most evident, however, from beyond our atmosphere.

Even between nations on the brink of nuclear war, partnership in space exploration has proven to be an effective means for bringing humanity together in peaceful collaboration.

Off the Ground to Find Common Ground

In the midst of the cold war, perhaps the most perilous conflict in human history, a joint space mission would mark a crucial turning point towards de-escalation.

On July 17th 1975, a little more than a decade after the Cuban missile crisis, Thomas Stafford and Aleksei Leonov shook hands between docked Apollo and Soyuz spacecraft. Despite ongoing nuclear brinkmanship between their nations, it was in orbit that the USSR and USA found common ground.

The partnership that followed has endured to this day with the success of the international space station, and numerous other international efforts beyond our atmosphere.

It would be wise for us to recall that moment. As we blunder back into a period of heightening international tension, the specter of nuclear proliferation continues to loom over our planet.

Here we are again.

This jockeying for supremacy has unsurprisingly spilled beyond our atmosphere, with the increasing militarization of space. In parallel, a new race for offworld advantage is taking shape, in particular with China’s enthusiastic gambit to secure a foothold on Mars first. As in all domains of human activity, the protection of national sovereignty will always be a powerful motivator, so long as there are nations.

In light of this unfortunate and persistent calculus, it is tempting to throw one’s hands up in despair. At first, this may seem like proof that space is an expansion into yet another theatre of human conflict. In a sense, that’s true. The dynamics of geopolitical relations are not going to instantly vanish as we reach beyond our native gravity well.

What’s more, some degree of international competition isn’t wholly or intrinsically bad. Defense departments have deep pockets and – sadly – national security draws funding like nothing else (at least, for now).

The essential realization, however, is that although our expansion into space carries with it the messy vestiges of humanity’s youth, it also bears the seeds of our growth.

Up until the moment that those Soviet and American astronauts shook hands in orbit 46 years ago, their nations, too, were scrambling for supremacy beyond our atmosphere. Like then, despite the adversarial posture initially adopted in the bid for space, off-world collaboration can become central to fostering stability and trust.

Already, Chinese and American diplomats are pointing to space exploration as a potential channel (and perhaps the only current channel) for developing goodwill.

“The Soviet and American spacemen will go up into outer space for the first major joint scientific experiment in the history of mankind. They know that from outer space our planet looks even more beautiful. It is big enough for us to live peacefully on it, but it is too small to be threatened by nuclear war.” (source)

It is the amplification of this vital narrative – of the shared human predicament – that international collaboration in space and the pursuit of a multiplanetary future offer most of all.

Most sources place the earliest evidence of warfare at around ten to twelve thousand years ago. We have millennia of experience seeing one another as competitors over ideology, land and resources. Large-scale human conflict is literally as old as civilization, but it is not necessarily an innate component of our nature. It is something we can outgrow.

Recent exponential advancements in our technology have pushed us abruptly into a position where we can, and must begin to think as a planet. Having only just recently learned how to function in small communities, however, this is a tall order for our young but rapidly changing species.

We need a cognitive scaffolding for our transition beyond this frame of mind; some substrate in which we can begin to mold a more functional, planetary narrative. Whereas the dynamics of our global zeitgeist are immensely complex, there are concrete ways to nurture this shift in thinking.

International collaboration in space is inherently well suited to the task. This is particularly true with regards to the pursuit of a multiplanetary future. The core motivations for pushing beyond this gravity well are intrinsically geared towards a shared and constructive human perspective.

By laboring in coalition to reach new worlds and secure life against existential threat, we frame ourselves with absolute clarity as a single, fragile community.

Through learning together how to become a true spacefaring species, we enrich our societies and cultures with the myriad innovations and experiences found therein.

With the full scientific infrastructure of our species brought to bear, we can seek out answers to profound questions on the origins of life and our place in the universe.

In the pursuit of these goals, nations are giving shape to a compelling, alternative human story. Based on the premise that the safety and prosperity of all Earthling life is paramount, these initiatives reach far beyond the divisive chaos of our adolescence.

It won’t unfold perfectly. There will be mistakes, conflict and setbacks. This isn’t a quick fix, and it will take some time, but international collaboration in space is a fundamental building block of the wiser, more united humanity we hope to become. 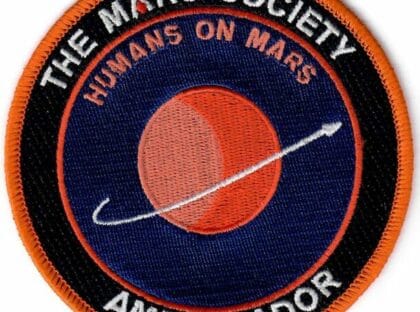