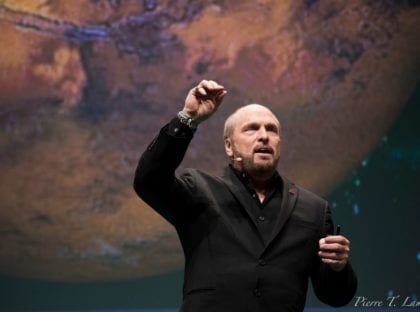 The Mars Society is pleased to announce that Rick Tumlinson, Founding Partner of Space Fund and Founder of Earth Light Foundation, Space Frontier Foundation and the New World Institute, will address the 22nd Annual International Mars Society Convention on Thursday, October 17th at 7:30 pm at the University of Southern California (in Los Angeles).

Mr. Tumlinson’s talk – “Reality Check – Taking the Fiction Out of the Space Frontier” – will take a hard core look at some of the myths and fallacies of the space movement, including some uncomfortable conversations about politics, policies, magic wands and wishful thinking that are often presented to the world community by those who look to open the space frontier.

He will also discuss what needs to change in our current planning, and how we can best survive the coming changes in the U.S. government, social trends and how to win the hearts and minds of the next generation, which will be the ones who will take those first steps on the Red Planet.

Mr. Tumlinson is a prominent space entrepreneur and space activist, having testified before the U.S. Congress on six occasions on the future of NASA, the U.S. spaced program and space tourism. He was listed several years ago by Space News magazine as one of the 100 most influential people in the global space industry and is a popular guest on news networks including ABC, CBS, BBC and CCTV (China).

For more details about the 2019 International Mars Society Convention, including how to register for the four-day conference (October 17-20), please visit: www.marssociety.org. Also please consider joining us at MARS ROCKS!, a special benefit concert for the Mars Society being held at the Globe Theatre in Los Angeles on the evening of October 18th.