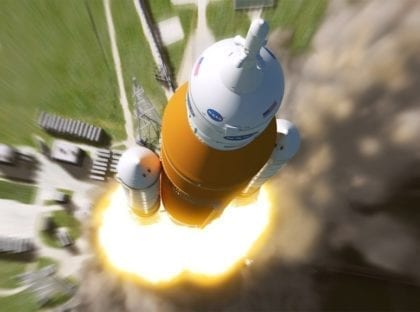 At Today’s NASA, Success Is Not an Option

The Trump administration has proposed a bold new initiative, dubbed the Artemis Program, that will send astronauts to the Moon by 2024 and Mars by 2033. As detailed by NASA administrator Jim Bridenstine in a presentation on May 23, the program will include some 37 launches by 2028, kicked off by the maiden launch of the agency’s new Space Launch System (SLS) heavy-lift booster in October 2020.

Unfortunately, the program as currently conceived is very unlikely to succeed, as it appears to be designed primarily as a mechanism for distributing funds, rather than for accomplishing goals in space. This was made clear when Bridenstine said that a baseline condition for the program would be that all piloted missions would use the SLS booster and the Orion crew capsule, neither of which has yet flown, rather than much cheaper alternatives that have flown. Furthermore, at 26 tons the Orion is so heavy that the SLS cannot deliver it to low lunar orbit with enough propellant for it to fly home. So rather than using a SpaceX Dragon (which at 10 tons is still 50 percent larger than the Apollo crew capsule), which either SLS or the already operational and vastly cheaper ($150 million per launch, compared to over $1 billion for SLS) Falcon Heavy could readily deliver, NASA is proposing to build a new space station, called the Deep Space Gateway, in a high orbit around the Moon, as a halfway house accessible to Orion.

NASA is trying to justify the Gateway with platitudes claiming that it will “provide a command center,” “create resilience,” and “establish a strategic presence around the Moon,” but this is all nonsense. The fact of the matter is that a lunar-orbiting space station is a liability, not an asset. It is not needed to support flights to the Moon and is certainly not, as NASA claims, necessary or even useful as a base for flights to Mars. It will cost a fortune to build and a fortune to maintain and will impose significant-to-severe propulsion and timing-constraint penalties on any mission that is forced to make use of it — as they all surely will be, to avoid public exposure of the Gateway’s uselessness.

NASA has properly targeted the south pole of the Moon for its intended landing, because ice resources there could be turned into hydrogen/oxygen propellant. This could allow lunar-excursion vehicles to explore the Moon or take off and return directly to Earth orbit, where they could be readily refueled, making the whole transportation system fully reusable and much more capable and economical. It would also free up our heavy-lift capabilities from lunar-logistics service so we could move rapidly onward to Mars. But putting the base in orbit rather than on the surface will make those resources worthless, because it would take more propellant to lift the ice to the Gateway than the amount of propellant the ice would yield. Moreover, because it is wasting billions on building the Gateway and launching a politically motived SLS flight in the fall of 2020 without a meaningful payload, NASA does not have enough money to support the development of a lunar lander — which is actually needed if you want to land on the Moon. The agency has therefore made a request for more cash, which the White House has supported with the kiss of death — a requirement that the funds be drawn from Pell Grants, guaranteeing rejection in the Democrat-controlled Congress.

Apparently, success is not an option, so the key priority is to assign blame.

The question is fundamentally this: Will NASA have a purpose-driven plan or a vendor-driven plan? A purpose-driven plan spends money to do things. A vendor-driven plan does things in order to spend money. For the half century since Apollo, NASA’s robotic planetary-exploration and space-astronomy programs have made epic accomplishments, because they have remained purpose-driven. In contrast, NASA’s human-spaceflight program has become vendor-driven and been allowed to drift. If we let NASA remain in this mode, we will not reach the Moon by 2024 or Mars by 2033. But if we insist that our entire space program be purpose-driven, taking full advantage of space resources to reduce the number of launches and the entrepreneurial space revolution to sharply cut their costs, we can not only meet these long-overdue goals, but greatly exceed them to truly commence humanity’s history as a multi-planet space-faring species.

Such is the choice before us.

With booming world-wide interest in NASA’s now operational James Webb Space Telescope, the Mars Society is pleased to announce that Dr. Marcia Rieke, Principal Investigator for the Webb’s near-infrared camera NICRam, will give an address – “The Webb Telescope’s First Months: A Treasure Trove of Results” – during the 25th Annual International Mars Society Convention October 20-23 at Arizona State University (Tempe). Currently a Regents Professor of Astronomy at the University of Arizona, Dr. Rieke focuses her research activities on… READ MORE >