The Zubrins and Ms. Cui also met and had fruitful discussions with creative and educational teams developing the new Shanghai Planetarium, the Chinese Aerospace Science and Technology Corporation, the leader of the Chinese Mars desert research station program, and Chinese STEM educators, all of whom invited the Mars Society to collaborate on their projects. A photo journal of the tour published by the Mars Society China can be viewed by clicking here.

A highlight of the trip occurred when the Zubrins and Ms. Cui were invited to witness the first un-tethered launch of a test vehicle for the planned reusable micro-satellite launcher being developed by the entrepreneurial Chinese rocket company Linkspace. In this extraordinary event, which occurred in a small sea-side town in China’s Shandong province, the young Linkspace team, led by its 26-year-old CEO Spencer Hu Zhenyu, launched its 3000 lbf thrust rocket in 20 knot winds to an altitude  of about 100 feet, hovered there – virtually motionless despite the strong winds – for 30 seconds and then brought it down to land softly less than 20 inches (!!!) from the center of the launch pad from which it had taken off. The team will soon continue its reusable system flight tests to much higher altitudes, and is developing a 20,000 lbf thrust methane/oxygen engine which it will use to deliver small satellites to orbit starting about two years from now.

Observing the launch, Dr. Zubrin called it “a tour de force, like watching the child Mozart composing a symphony.” As the CTO of a multi-billion dollar Chinese corporation was also present to observe the launch, there is little doubt that Linkspace will secure the investment it needs to scale up. According to Spencer Hu, the team was inspired to undertake its efforts by SpaceX’s success and the vision of human Mars exploration set forth in Dr. Zubrin’s The Case for Mars. Some five other Chinese entrepreneurial launch companies are now actively

Dr. Zubrin’s public talks were attended by hundreds of people, with tens of thousands more watching online. He was also interviewed by several Chinese press outlets, including the influential Global Times newspaper.

Among the most exciting opportunities that occurred during the trip to China was an invitation by the creative team of the new Shanghai Planetarium – which will be by far the largest planetarium in the world upon completion in 2020 –  to have the Mars Society collaborate in helping to propose and design exhibits.

The Mars Society was also invited to send a team to the new Chinese Mars desert station – which is already operating as a STEM project – to provide advice to help enable analog research programs there as well. For their part, the Chinese vowed to send a team to witness the Mars Society’s University Rover Challenge that will take place at the Mars Desert Research Station in Utah May 30 – June 1, with a goal of enlisting several Chinese university teams to participate in the competition next year and possibly organize national high school level rover competitions at the Shanghai Planetarium as well.

For more information about the Mars Society and its mission, please visit: www.marssociety.org. 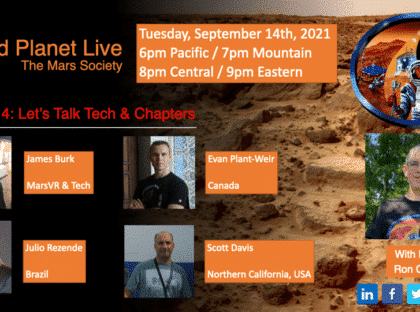 Come join our Red Planet Live video podcast on Tuesday, September 14th at 6:00 pm Pacific / 9:00 pm Eastern for an amazing look inside the awesome technology that the Mars Society is working on! During the first half of the show, Ron Craig will be interviewing James Burk, Mars Society IT Director, about some of the technology initiatives that he and his team are spearheading, including the MarsVR project, the innovative aspects of the organization’s virtual convention scheduled for… READ MORE >

Get Involved with Our Chapters!

The Mars Society, the world’s largest and most influential space advocacy group dedicated to human exploration and settlement of the Red Planet, has dozens of chapters in the U.S. and around the globe. These chapters are involved in a variety of space advocacy and educational outreach projects, including convening public events, hosting Mars sci-fi movies, actively promoting humans-to-Mars on their social media platforms, organizing STEM initiatives and much more. To learn more about Mars Society chapters and their activities around… READ MORE > 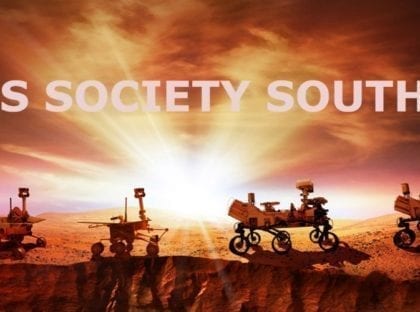 We are glad to announce the establishment of Mars Society South Asia (MSSA), the official chapter of The Mars Society for countries in southern Asia. MSSA will serve as a non-profit space advocacy organization dedicated to the human exploration and settlement of the planet Mars. The new group will also act as the main authority for organizing the Indian Rover Challenge (IRC), part of the Mars Society’s Rover Challenge Series (RCS). MSSA teams comprise of alumni of more than 15… READ MORE >