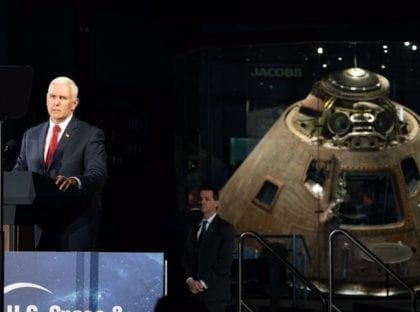 Vice President Pence’s declaration of intent to land Americans on the Moon by 2024 was a welcome statement of resolve, vitally necessary to give the nation a human space flight program that is actually going somewhere. His call to put the base at the lunar South Pole is also welcome since that is where ice reserves can be found which could be used to refuel spacecraft used to explore the Moon or return to Earth.

However the goal will not be achieved if NASA is allowed to continue to misdirect its efforts to build an orbiting Lunar Orbit Gateway (or Tollbooth as it is should more accurately be termed). This legacy project will cost a fortune to build, a fortune to maintain and add to the propulsion and timing requirements of any lunar mission forced use it.

The uselessness of the Tollbooth can readily be seen by noting that any lunar excursion vehicle (LEV) capable of doing the 6 km/s delta-V round trip flight from the lunar base to the Tollbooth could just as easily fly one-way from the lunar base to low Earth orbit (LEO). So while the Tollbooth plan would require using an SLS or alternative heavy lift capability to deliver astronauts in an Orion to meet the LEV at the Tollbooth, without such an expensive installation we could just deliver astronauts in a Dragon launched by an inexpensive Falcon 9 to meet the LEV in LEO, along with enough propellant to send the LEV back to the Moon.

By not having to use the Tollbooth, we could conduct lunar missions using a launch vehicle with less than 1/10th the cost and more than ten times the flight frequency as would be required with the Tollbooth. Such a more advantageous flight plan, known as Moon Direct, is described in detail in my recent article in New Atlantis (https://bit.ly/2FBR5Rs).

Dr. Carol Stoker, a senior scientist at the NASA Ames Research Center and one of the co-founders of the Mars Society, will be giving a virtual talk about the ongoing search for life on Mars on Wednesday, January 12th at 7:00 pm CT during a chapter meeting of Mars Society Chicago. Dr. Stoker has been involved with Ames for 36 years, specializing in a range of Mars exploration science and technology. Most of her recent work has focused on developing… READ MORE >

By Dr. Robert Zubrin, National Review, 12.28.21 On Christmas Day, NASA’s long-awaited James Webb Space Telescope (JWST) was finally launched into space. The JWST is, by far, the greatest astronomical observatory ever built. Its primary mirror is 21 feet across, triple that of Hubble, giving it ten times the light-gathering capacity. Add to that the fact that its infrared optics are ten times as sensitive, and the result is a telescope a hundred times as powerful. The discoveries it could make are beyond reckoning…. READ MORE >

Since its landing in Jezero Crater on the planet Mars in February 2021, NASA’s Perseverance rover has been racking up achievement after achievement, including driving 2.6 kilometers over rough Martian terrain, collecting and preparing rock samples for a return mission to Earth, and using the Ingenuity helicopter for aerial exploration.    To keep the global community up-to-date about Perseverance and its scientific results, the Mars Society has invited four leading NASA-JPL scientists to give virtual plenary talks about the mission,… READ MORE >