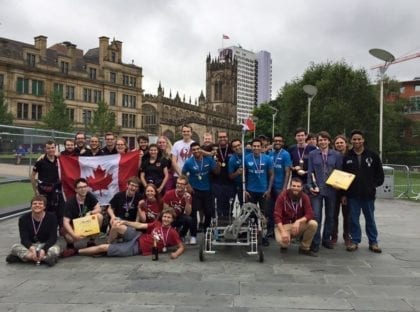 The new UK branch is based out of Manchester, England, but its members also come from the areas of Oxford and London and have been meeting on a regular basis since October 2015. By organizing the UKURC, Mars Society UK wants to inspire university students in the country to focus on STEM (Science, Technology, Engineering and Mathematics) disciplines through rover-robotic design, as well as Mars and planetary exploration.

16 student teams from the UK, but also North America, Asia and Europe, applied to participate in the 2016 UKURC contest. While originally intended for UK teams, great interest shown by international students convinced event organizers to open up the rover challenge to all.

The UKURC took place on July 23rd and 24th in Manchester’s city centre at Cathedral Gardens, just steps away from the famous Printworks and the National Football museum. The competition was able to partner with Manchester City Council as part of the 2016 European City of Science along with the EuroScience Open Forum (ESOF) conference being held that same weekend.

The city of Manchester provided the Cathedral Gardens public park space with undulating hills and valleys mimicking an uneven Martian landscape. The UKURC Executive Team also built a four by eight meter “Mars yard” with support from Cemex, a major UK supplier of cement, concrete and other material, which delivered eight tons of Mars-like red dirt to the site. Other commercial support came from Airbus and Starchaser Industries.

Six student teams eventually arrived in Manchester for the rover competition, representing the host country, the United Kingdom, as well as Canada, India, Egypt and Poland. Thirteen teams passed final registration and were scheduled to compete, but all five student teams from Bangladesh and one from Nepal were unfortunately not able to attend due to UK visa complications. In addition, a team from the U.S. had to cancel just a few weeks prior to the event.

The student team from India also experienced challenges in obtaining UK visas, with several members unable to attend. In the end, the Indian team consisted of only one member – Aditya Pattiyeri. UKURC volunteers acted to help the lone Indian representative by helping him build his rover and provide other means of support during the competition. UKURC organizers were very impressed with the Indian student’s perseverance to be part of the rover challenge “no matter what.”

The Manchester area was experiencing heavy rains and even flash flooding during the weeks prior to the UKURC. With luck, the last weekend of July was mostly sunny, hot and dry. Sunday did provide some grey clouds and rain, but teams were advised to be ready to waterproof their rovers at a moment’s notice due to England’s unpredictable weather. Participants came prepared with plastic wrap and umbrellas to shield their electrical components from the rain. For the most part, the UKURC had excellent conditions and when it did not, teams retreated to their tents for a break and awaited clear skies.

The first day of competition offered tasks in line with the Mars Society (U.S.)’s, such as a mobility task that allowed rovers to maneuver through a timed obstacle course. Another task required rovers to photograph and retrieve a sample from the site. The rover team’s geologist then had to analyze the sample and present it in front of the judges, consisting of Dr. Susanne Schwenzer (the Open University, UK) and Dr. Jen Blank (a NASA astrobiologist).

During the second day of the contest, student teams were required to participate in an astronaut assist task whereby rovers had to find dropped tools around the “Mars Yard” course, retrieve them and deliver them to an injured and immobile Marsonaut. This last challenge proved to be the most difficult as none of the rovers were able to successfully retrieve any tools. Instead, most points were earned for this task by successfully driving through difficult terrain such as sand, gravel, and large rocks.

According to event organizers, the largest obstacle for teams was communications, especially in an urban environment such as Manchester’s city centre. Communications is a typical issue at Mars Society rover challenges, even at remote venues like MDRS. Teams are expected to step up and adapt. They are encouraged to ask the judges questions, trouble shoot, and problem-solve during the competition. “Those that accepted the advice of our competition organizers were usually successful in completing a good portion of the course. It was all part of the challenge and the learning process that takes place at our competitions,” said Mars Society Executive Director, Lucinda Offer.

The Mars Society UK and the UKURC Executive Team would like to thank all of the hard-working student teams that managed to (and intended to) participate in the inaugural rover competition. Also, the UK chapter would like to express its appreciation to the Mars Society (U.S.) and the URC’s Kevin Sloan for their support and guidance. Hosting this challenge in the UK was also a successful proof of concept for the UKURC Executive Team and built trust among local council members and other dignitaries in the country that this was possible. It also created and inspired partners within UK businesses, universities, and scientists. The Mars Society UK is now known for hosting robotic challenges and looks forward to the next one in 2017.

A full update about the inaugural United Kingdom University Rover Challenge will be presented at the 19th Annual International Mars Society Convention, scheduled for September 22-25, 2016 at the Catholic University of America in Washington, D.C. Register today!