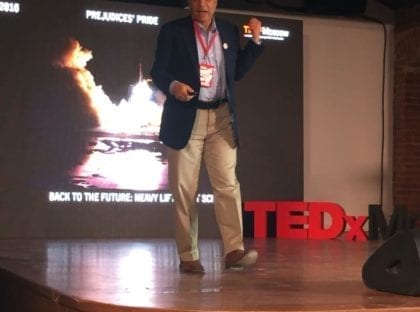 Mars Society President Dr. Robert Zubrin recently concluded a whirlwind tour of Russia, giving a series of seven talks in Moscow and St. Petersburg and conducting meetings with Russian space leaders and numerous interviews with Russian press along the way.

Dr. Zubrin arrived in Moscow on May 26th, and after attending a gathering that evening went on to give interviews with Komsomolnaya Pravda Radio, Izvestia and Life TV the following day.

On May 28th he spoke at the TEDx Moscow conference (video to be posted in the coming weeks), and on May 29th, he addressed audiences at the Moscow Planetarium and the Moscow Polytechnic Institute (formerly MAMI).

Then it was on to St. Petersburg, where Dr. Zubrin gave a May 31st talk in the Peter & Paul Fortress, the original home of the Soviet rocket program, and at the Cosmonautics Federation. He then returned to Moscow on June 1st to meet with leaders of the Institute for Biomedical Problems (IBMP), who conducted the Mars 500 program and are continuing with related research. Dr.  Zubrin and IMBP representatives discussed future collaboration between the Institute and the Mars Society, beginning with the Mars Desert 80 mission this fall.

While in Moscow, Dr. Zubrin also gave a ‘chalk talk’ about the Mars Society’s concept for a Translife artificial gravity satellite, which could for the first time allow researchers to gain an understanding of the long-term effects of Mars gravity both on mammals born on Earth, as well as those born and raised on the Red Planet – and send them on round-trip missions into deep space to learn about cosmic ray effects as well. The prospects for collaboration on this project look very promising.

In addition, Dr. Zubrin gave lectures at Baumann State University on June 1st, the Cosmonautics Museum on June 2nd and at the Startup Conference at Skolkovo University on June 3rd, where he was also interviewed by RT Television and met a number of high-level officials from the Russian space program and space industry.

In his travels, Dr. Zubrin encountered many people who had read his humorous book “How to Live on Mars,” which was published in Russian in 2015 and has done quite well in the country. As a result, his principal work, “The Case for Mars,” is now scheduled for publication in Russian this fall. This could lead to rapid growth of the Mars Society and its mission in Russia.

Commenting on his tour, Dr. Zubrin said, “I found the response of the Russians extraordinary. While Russians take great pride in their own achievements in space, they also acclaim what others are doing to advance the cosmic frontier with tremendous enthusiasm. There are plenty of people in Russia who want to see humans on Mars just as much as we do. While under current conditions, an intimate single-effort collaboration along the lines of the International Space Station program might be difficult, a friendly Olympic-spirited competition, where we go to the Red Planet together, each bringing our own ship, competing for the honors of discovery but ready, willing and able to help each other in need, could be tremendously productive. Perhaps others would care to join as well, with European, Japanese, Chinese, and Indian ships too, flying separately perhaps, but landing together.”

A picture gallery of Dr. Zubrin’s tour of Russia can be found on the Mars Society Facebook page. For additional details about the Mars Society, please visit our web site.