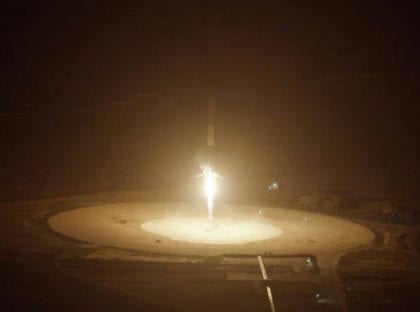 The Mars Society, its staff and membership commend SpaceX, its founder, Elon Musk, and its team of scientists and engineers on the successful landing of the first stage of its Falcon 9 rocket at Cape Canaveral. SpaceX brought the rocket back to Earth for a soft touchdown, marking the first-ever rocket landing during an orbital launch. This major accomplishment proves launch vehicle re-usability, a pivotal event that will move humanity one step closer to exploring the solar system, and with it, the planet Mars.

“The SpaceX team had previously shown that they could develop new hardware in one-third the time at one-tenth the cost as the mainline aerospace companies. Now they have done something that the majors have never been able to do. And not just anything, but the single most important step towards inexpensive space launch – controlled recovery of the launch vehicle first stage. The competition had better wake up because they’ve just been ‘Sputniked’. Chapeau!,” said Mars Society President Dr. Robert Zubrin.