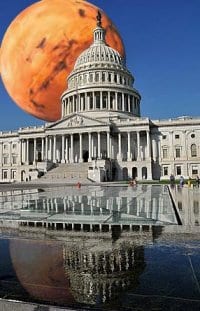 The Mars Society and the Space Exploration Alliance (SEA), a growing network of major space advocacy groups, including the Planetary Society, the National Space Society and Explore Mars, will be organizing and hosting the 2016 Legislative Blitz on February 21-23 in Washington, D.C.

The annual March-on-Capitol Hill event will bring dozens of volunteers, including Mars Society members, to our nation’s capital to help educate members of Congress and their staff on the importance of human and robotic space exploration, the need for increased funding to NASA and the goal of humans to Mars.

Last year’s SEA Legislative Blitz was the most successful in years, with volunteers holding 170 meetings with congressional representatives and aides to drive home the fact that there is strong constituent/bi-partisan support for an ambitious U.S. space program.

“The Mars Society has always been front and center when it comes to meeting with our local representatives and advocating a space exploration program that includes a human mission to the Red Planet. Our membership has been actively supporting the SEA and participating in our right to be heard since 2004,” said Mars Society Executive Director Lucinda Offer.

The official registration page is now live. Please join us this February in Washington, D.C. and help promote humanity’s future in space!