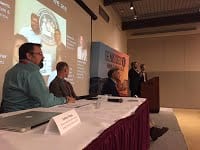 The 18th Annual International Mars Society Convention held at the Catholic University of America August 13-16, 2015 was a great success. Some 250 people attended to hear over 80 presentations covering all aspects of Mars exploration, including the latest robotic missions, human expeditions and settlement of the Red Planet and Mars habitability.

By most accounts, the high points of the four-day conference were two dramatic debates conducted on the evenings of Thursday, August 13th and Friday, August 14th. The first was a real knock down encounter between Mars One (with its team led by Bas Lansdorp) and its MIT graduate research critics arguing the proposition “Is Mars One Feasible.” The second, also very forceful, featured former Apollo 17 astronaut Dr. Harrison Schmitt, Mars Society President Dr. Robert Zubrin, and Planetary Society Director of Advocacy Casey Dreier facing off on the proposition “Where Next for Human Exploration,” (with the three making the case for the Moon, Mars and Mars orbit, respectively). We won’t tell you who won, but the debates were filmed and can be viewed on our YouTube page, so watch them and decide for yourself.

Commenting on the debates, Dr. Zubrin said, “This was great. This is exactly the kind of thing the U.S. space program has needed for a long time. We’ve wasted four decades by allowing the space program to be diverted into quagmires like the Space Shuttle and the ISS that could not have survived the scrutiny afforded by open debate. Now we face another potential decade-long diversion in the form of the Asteroid Redirect Mission. These things need to be debated in the open, so the truth can be brought into the light, and we can start making the right decisions moving forward. We are certainly going to have a lot more of these debates at our conventions in the future.”

Another high point was the Mars Society banquet, which was addressed via Skype by Andy Weir, the author of “The Martian” (soon to be released as a major motion picture starring Matt Damon and directed by Ridley Scott). In the words of one banquet attendee, Andy Weir was “a hoot.” We look forward to seeing his great novel on screen this October.

There were far too many talks to list here (a complete agenda may be found on our web site), but one standout that simply must be mentioned was a plenary given Friday evening by Dr. Carol Stoker of NASA Ames Research Center, who presented a review of all the evidence gathered over the past two decades of successful Mars probes that support the suspicion that life may well exist on the Red Planet today. “We need to send a life detection mission to Mars,” Dr. Stoker concluded, eliciting near universal agreement on the basis of her very strong case.

Referencing Dr. Stoker’s address, one of the scientists present noted that there would be plenty of room on the Mars 2020 rover for life detection experiments, and many other additional instruments as well, if two-thirds of the rover’s science capability was not being sacrificed to allow it to cache samples for a Mars Sample Return mission which is not currently funded and may never come, or if it does, will certainly have its own sample collection capability anyway.

To watch all of the plenary talks, panel discussions and public debates held during the 2015 International Mars Society Convention, please visit the Mars Society’s YouTube page.